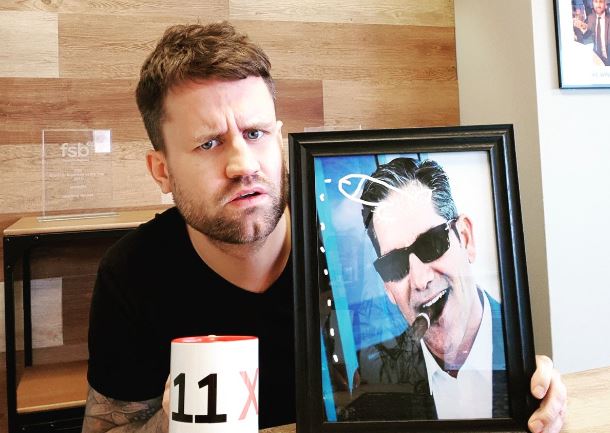 Mike Winnet (real name Michael McGann) is an entrepreneur, self-proclaimed ‘de-motivational speaker and best selling author on Amazon. Most likely you’ll have come across Mike through his satirical posts on LinkedIn or Contrepreneur podcast on YouTube.

Mike is actually a successful entrepreneur in his own right. The Warrington based lad co-founded Learning Heroes in 2015, an online e-learning company. They specialised in creating short, animated training videos that were more engaging than the usual boring PowerPoint presentations. Learning Heroes was acquired by Litmos in 2017 in a multi-million pound exit that made him a millionaire.

Unlike others on YouTube who call out fake gurus, Mike actually spends thousands to attend seminars and try out these sketchy money making schemes. He’s invested in everything from cryptomining, forex, property and affiliate marketing to save the average person on the street from getting scammed. For example he invested £30,000 in cryptomining rigs that didn’t exactly produce the expected returns.

Over the last year in particular, the channel has really taken off with more people discovering the videos through the YouTube algorithm. Currently it’s filling a strange niche, where people love to watch these guru’s getting exposed publicly. Mike also interviews gurus along with some successful entrepreneurs which are always an interesting listen.

Samuel Leeds appeared on the podcast, a well-known property investor and educator in the UK who doesn’t exactly have a stellar reputation. Viewers were regularly mentioning Samuel in the comment section as a guest worth interviewing. I felt that Mike was fair during the interview but didn’t know enough about him to really follow up on his bullshit answers. It’s clear that some of the answers Samuel Leeds gave weren’t accurate and were exposed as lies later.

Examples of other guests he’s interviewed:

Nearly every fake guru is a best selling author these days, contrepreneurs use use it to boost their authority and upsell expensive products. To see how easy it was, Mike released a 150 page ebook with just the words “blank page” on each page. Somehow how the book passed Amazon’s strict “manual check” on each upload. He only had to sell 49 copies of a 99p book within 24 hours to achieve this feat, the trick was listing the ebook in a less competitive niche.

Mike Winnet is estimated to have a net worth of £2 million. Currently his YouTube channel doesn’t generate any profit it’s mainly just to educate people. Hopefully he doesn’t blow all of his cash on these money making schemes!

IAM Productions Group is his latest venture, a video production company. They produce the hilarious animations for the videos. It was only through companies house that I discovered that his real name was Michael McGann, most likely due to legal reasons involved with the sale of his old company and also to keep his personal life private.